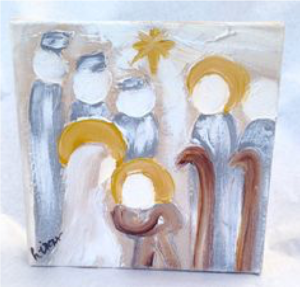 I love Mary Oliver, as most of you here would know. Even at Christmas I have a poem to open my sermon. It’s called “The world I live in”.

The world I live in.

I have refused to live
locked in the orderly house of
reasons and proofs.
The world I live in and believe in
is wider than that. And anyway,
what’s wrong with Maybe?

You wouldn’t believe what once or
twice I have seen. I’ll just
tell you this:
only if there are angels in your head will
you ever, possibly, see one.

I read in the paper the other day about why it’s okay for children to believe in Father Christmas.  Some would say, no, Christmas is about Jesus, not Father Christmas, but that denies the fact that Christmas is not something the early Christians celebrated. It wasn’t until Emperor Constantine in the 4thcentury took a pagan festival called Sol Invictus, or the Birthday of the Unconquered Sun as the date for Jesus’s birth because it wasn’t really known, to get things going, and even then it wasn’t called Christmas, but the Festival of the Nativity of our Lord.  Christmas wasn’t really celebrated as a huge event until the 18thcentury. Anyway the people interviewed for the article suggested that the myth of Father Christmas is a form of storytelling and it really is okay.  It’s using a story to transmit some deep and meaningful messages to the kids.  Things about kindness, sharing, and the spirit of love and life.  Now I can hear you saying that it gets commercialised and trivialised, and yes I agree. But the spirit of Christmas is there if you look.

So while I don’t want to compare Father Christmas with Jesus, I do want to suggest that our Christmas stories are also so much more than a set of facts, which we regurgitate every year and then forget. Or worse still discount as being unbelievable.

Rather if we see the Christmas stories as myths, beautiful and powerful, it brings them alive.   As Keith Rowe says, myths are the mirrors in which we see what we might become. They represent a way of human knowing that can be placed alongside scientific knowledge as two complementary pathways into life’s truth. They don’t have to be literally true to be true!

And they can come up with some unexpected insights. Things we don’t see until we really see!

I have spent many a Christmas day sermon talking about the stories, how they only appear in 2 of the 4 gospels, how they reflect in miniature the world Jesus lived in, how they were written a long time after the death of Jesus. How they have different accounts, and how they represent the time they were written. So today I am going to go wider and more universal.

While both accounts are full of earthly things, and some mystical things who is the child at the centre?  The Gospel of Matthew describes him as Emmanuel, God with us.  Jesus is at the centre of the story, the character extraordinaire.  A revelation to us about where God is to be found and what God needs from us.

This is the essence of the stories.

Even in our cynical, secular world, it seems to echo a strange and beautiful and evocative call.  Where is God? Tell us about your God. As Keith Rowe suggests, “There are no facts upon which we can say for certain that God is with us or even that God even is, but over the centuries those who have taken the stories of the birth of Jesus and the life of Jesus into their hearts and imaginations have been changed.  And maybe they have glimpsed this God”.  Not a God in the sky, not a God who intervenes in human affairs every now and again, but a God found in the fragrant muck and misery and marvel of the world as Frederick Buechner would say. The reading today from the Gospel of John speaks of this.  We hear what the early Christians heard. Jesus has come into the world to bring life and light.  God’s light and life.

So the birth stories we hear in December each year are not really about a baby at all but about a man, called Jesus and about his life in God and in the world.

They are about finding God in a human Jesus, who lived and died in 1stcentury Judea, but who more than anyone since has shown a new way to live with one another.  A way of love, grounded in the earthy world that he knew and in the indwelling spirit of God that guided him.  A kingdom of love, compassion, forgiveness and deep joy irrespective of race religion, class, gender and age.  Where everyone was to be included and no one went without. A kingdom of justice.

The stories of the shepherds, of a defenceless baby, of parents who were refugees, of a smelly stable, and animals and women and angels reflect this alternative view. One that so challenged the authorities of the day, the Roman Empire but also some of the religious leaders. Instead of power and violence and injustice and exclusion, hallmarks particularly of the Empire, we get a Jesus who was a man for others.  He taught and demonstrated that to find meaning in life one must learn to live for others. It is a message that resonates with the lives of all human beings everywhere, not just those in the 1stcentury. We all want to be loved and included.

So what do we do with Christmas in 2018? I personally love Christmas time because I am a softy at heart. And I confess to telling our children about Father Christmas and leaving out carrots and mince pies for him and his reindeer.

And I believe it will last when we see that the God we meet in Jesus is not some otherworldly creature confined to the outer reaches of our reality. Rather the God we meet in Jesus is the life force that surges through all living things (Dawn  Hutchings), that drives us to be better than we are, more loving, more compassionate and more forgiving.  Our hope lies in people touching and connecting to God’s spirit in ways that make a difference, both to themselves and to others. Who walk and live the way of Jesus.

People I have seen this week, this month, this year. Who care for the homeless and those without food and shelter, who care for the sick and dying in our hospitals and homes, who donate money and time for others, and those who try to change the status quo by advocating, protesting and generally being annoying to our politicians.  Let’s continue to pester them!

As Martin Luther King has said, “hope comes in many forms, mostly not supernatural.  Rather in the shape of people, people helping people. God is found in the midst of this action, not separate from it.

I titled this sermon, an unexpected Christmas, but really the unexpectedness of it is how these stories, surprisingly live on, even when you think they may disappear. Jesus message of love for others, powerfully expressed, a long time ago, lives on in our precarious and complicated world because of the truth that lies beneath and beyond them. For God is still here, working within all of creation and in you and me and in all people everywhere.

We just have to look and listen. And follow his lead.