God, the Universe and Us – A Beautiful Communion 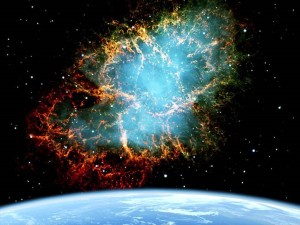 The other day I was teaching a first year human biology class, when I recognised a student who shared a friendship with a member of my church congregation. At the end of the class, we had a chance to speak to one another, share news and work out when we had last meet. It happened to be at her friend’s daughter’s baptism, which I conducted.

As we were finishing our conversation she asked me a question which has prompted this blog.  How do I combine teaching human biology with being a minister in the church?

The answer to these two assumptions would be a definite “no”.

I tried to explain why I am very happy doing both, and have an integrated view of life that embraces the joys and astounding aspects of science, all aspects of science and the deeper spirituality and purpose that arises from a faith in God.

The problem for many people is that their understanding of God and where to find God in this incredible life becomes problematic. So it’s easier to throw the baby out with the bathwater!

I have spent all my adult life in science, in clinical research and in teaching anatomy and human biology. Yet I only came to the church, or to some exploration of faith in my 20s.

Why, you may ask, did I do this?  Why explore this inner aspect of ourselves and creation, when I didn’t grow up in it, for many people have a link to the church through their family or upbringing which keeps them connected.

I was teaching anatomy and preparing specimens for classes. This means dissecting bodies of people that have been donated to show various aspects and areas of interest.  While doing this particular activity, it is hard not to think more deeply about what it is to be human.  And that’s where I started.  A journey not just about what we are now, but the process from which life has come into being, from the universe, to expanding galaxies to evolutionary biology down to the movements of atoms and subatomic particles. A journey not only to what I could see but what I couldn’t see.

Through it all I realised that the whole thing is pretty damn amazing! And I have remained amazed, 30 years later.

Along the way I have had many questions and queries, and explored deeply.   But my ongoing experience has gradually led me to an understanding that the God I believe in and experience as a spiritual presence lies deep within all of life, from the very beginning of time until now, and on into the future.  I like to think that the story of the universe, the story of evolution, and the ongoing story of us is also the story of God.  And the story has not finished.

I want to make it clear that this is not a God beyond the world, changing things on a whim or in response to some great prayer, but an immanent presence that leads to life, a creative, loving, and compassionate life. At every level this spirit urges for communion and relationship, so that atoms combine with atoms, molecules with molecules, cells with cells, and people to people.  We have this urge to connect with one another, as though it is in our DNA.  It cannot be seen or measured, only felt and experienced.

But how did I come to this understanding.  Well firstly remember I am a scientist, and in awe of the world we live in and ourselves.  Yet I could not take from it that there was no underlying purpose, no creative and life giving direction.

But neither could I accept the idea of an intervening God, who zapped things when the time was right, like an external puppeteer.

I remember asking a very good friend of mine many years ago, when I was wrestling with all of this, “how do we find and understand God within human evolution”.  He replied that he didn’t think this was particularly relevant so don’t worry about it.

Well, I ignored that piece of advice, perhaps one of the few times I did ignore him, because I thought it was very important.  This was the 21st century, if God was to survive, we had to understand God in the world in which we lived and moved and had our being.

When I started to explore this in some meaningful way I came across a philosopher/theologian called Alfred North Whitehead and his ideas, called Process Theology.

It opened my eyes to something new, a new way of seeing how the world is.  Not as a machine, but a world with a heart.

Process theology talks about moments of experience and that everything is connected to everything else, such that at each level everything is interrelated.  Ideas that initially are hard to get your head around it. But with the continual development of quantum mechanics, of our knowledge of physics and biology and genetics one thing is certain, the world and human beings are much more complicated than they first appear.  And much more interrelated, at every level.  It is the relationship between things that matter, not the things themselves.  And into this mystery of relationship I find God, a spiritual presence, or energy or breathe, at the very heart of life and love. A mystery beyond all mysteries.

As Charles Birch says, a leading component of process theology but also of science, God is the spirit that breathes life into the creatures and calls the higher organisms to the more abundant life of love.

There have been many people like Birch who have taken Whitehead’s ideas and explored and expanded them.  For me it was a light bulb moment, where I could find some way of integrating what I knew to be true both from science and spirituality.

The journey started then, and hasn’t stopped.  It is a journey of a lifetime.

Can I teach anatomy and human biology, evolutionary theory and genetics and be a minister of a Uniting Church, certainly.  God is a God of the universe, of all of creation and of you and me.  This God is not external to the world but found within all of creation as a creative and life giving presence.  One way to worship this God is to revere and protect the natural world and be in awe of its immense beauty and intricacies, and yes, even its power and devastation. Another way is to teach about life, what it is to be human, and teach it with passion, for it is a revelation of the ongoing beauty and divine and eternal spirit present in all things.

And that’s what I am going to continue to do.